On July 19, 2012, an eruption occurred on the sun that produced all three. A moderately powerful solar flare exploded on the sun’s lower right hand limb, sending out light and radiation. Next came a CME, which shot off to the right out into space. And then, the sun treated viewers to one of its dazzling magnetic displays – a phenomenon known as coronal rain.

The footage in this video was collected by the Solar Dynamics Observatory’s AIA instrument. SDO collected one frame every 12 seconds, and the movie plays at 30 frames per second, so each second in this video corresponds to 6 minutes of real time. The video covers 12:30 a.m. EDT to 10:00 p.m. EDT on July 19, 2012.

I found this short 4 minute video about how moving companies operate in Japan.  The level of service is astounding.

I decided it was time to upgrade my workbench.  Below are some of the photos I took to document the process. 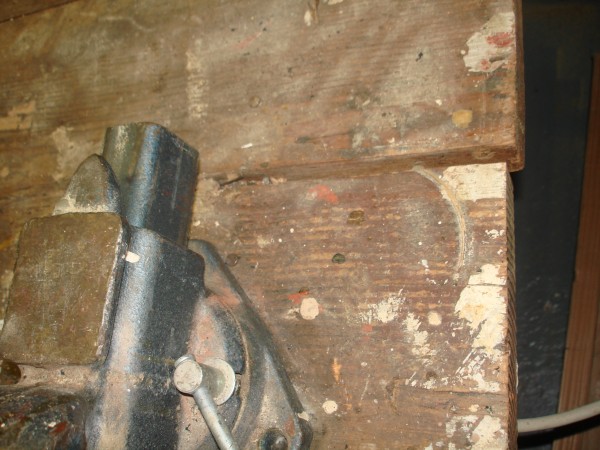 And large gaps between the tabletop boards

Have you ever been curious as to which part of the cow your steak came from?  Look no further. 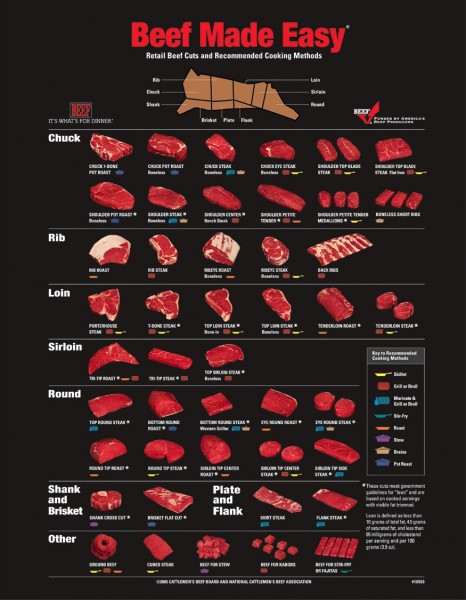 After having a little bit of trouble crosscutting anything wider than about 7″ on my tablesaw I decided that I needed a crosscut sled.  Rather than spending over $100 to buy one I decided to make one myself using a 2’x4′ sheet of MDF and a 5/4″ thick stair step.  Total cost for the build was under 25 bucks.

I didn’t do a very good job taking pictures of the first part of the build, so I’ll do by best to describe the process with text.

The first thing I did was cut two 3/4″ slices from the end of the MDF to use as runners for the sled.  Then I cut a 16″ piece from the MDF using a circular saw.  This cut didn’t need to be exact (or even straight) since it would be trimmed later.  At this point I had the two halves of the sled.  On each half I cut a 3/4″ wide 3/8″ deep dado to hold the runner.  I screwed the runner down from the top of the sled making sure that the tops of the screws were below the surface of the MDF.  Finally I ran each half of the sled through the table saw using the runner as a guide, leaving me with two properly sized sections as seen below.

I call him Big George

The first lettuce I’ve ever cultivated. Planted a little less than two months ago. 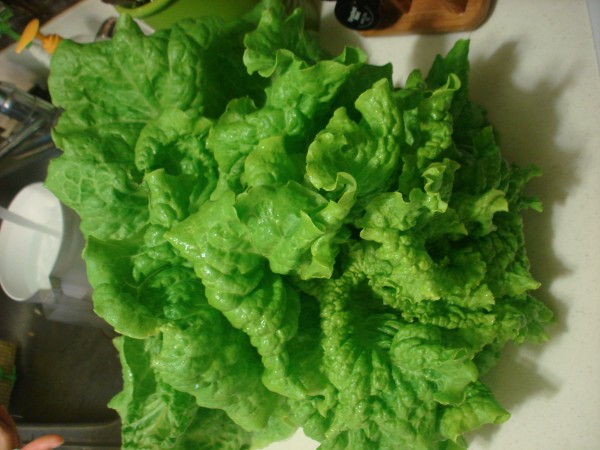 The Voder by Homer Dudley (Bell Telephone Laboratories, Murray Hill, New Jersey) was the first device that could generate continuous human speech electronically. The flowing composition of the many speech sounds had to be done manually in realtime on a special keyboard shown in this video.

In 1939, Alden P. Armagnac wrote in “Popular Science” about this speaking device: “He hasn’t any mouth, lungs, or larynx—but he talks a blue streak. His name is Pedro the Voder, and you may see him in action at the New York and San Francisco world’s fairs. His creation from vacuum tubes and electrical circuits, by Bell Telephone Laboratories engineers, crowns centuries of effort to duplicate the human voice.
To manufacture Pedro’s conversation, his operator employs a keyboard like that of an old-fashioned parlor organ. Thirteen black and white keys, fingered one or more at a time, produce all the vowels and consonants of speech. Another key regulates the loudness of the synthetic voice, which comes from a loudspeaker. A foot pedal varies the inflection meanwhile, so that the same sentence may state a fact or ask a question. About a year’s practice enables an operator to make Pedro talk glibly.”

And the “Time” wrote on January 16th, 1939: “The Bell Telephone demonstrators took pains to make it clear that Voder does not reproduce speech, like a telephone receiver or loudspeaker. It originates speech at the touch of an operator, synthesizing sounds to form words. The men who built it were able to do so because in their telephone researches they had made a close study of how speech sounds are made by the human larynx, mouth, breath, tongue, teeth and lips. With electrical filters, attenuators, frequency changers, etc. they found that they could produce 23 basic sounds; that intelligible speech could be synthesized from various combinations of these sounds, controlled by a skilled operator manipulating a keyboard and foot pedal.
The machine’s possible sound combinations are so various that Voder can imitate the inflections, overtones and shading of human diction. By altering pitch it can change from a man’s voice to a woman’s or a child’s. It can mimic animal sounds, locomotive whistles, the noise of an airplane engine. Since the fluent production of speech on a keyboard is not so simple as pounding a typewriter, Bell Telephone picked 24 of the cleverest telephone operators from 300 candidates, gave them about twelve months’ intensive training as Voder operators. Like concert pianists, they have to keep in trim by practicing several hours a day. The most difficult speech component they must coax out of Voder, and the one that sounds least natural, is the letter l. When someone at last week’s demonstration asked for the words ‘Bell Telephone’, they came out something like ‘Behrw Tehwephone’.”

The Voder was to some extent a by-product of the Vocoder, as S. Millman stated it: “In conceiving the vocoder, Dudley recognized the carrier nature of speech. He observed that the speech signal is formed by modulating (with the slowly changing vocal resonances) the spectral shape of the sound produced by vocal sources. The vocal sound sources may be periodic, as produced by vocal cord vibration, or aperiodic, as produced by turbulent airflow at a constriction.
The modulations in shape of the speech spectrum could, therefore, be measured in terms of the relative energy in contiguous filter bands, and the periodic (voiced) or aperiodic (unvoiced) sources could be characterized by a ‘pitch’ detector (a frequency meter). The signal could be reconstituted (synthesized) from these data by allowing to amplitude modulate the respective outputs of an identical filter bank which was excited by either a periodic pulse source or a noise source.”